On the bus home you ask me
what we’ve seen.
I try to conjure Leon Golub–

and you listen, clutching fervently
at what’s already being erased
by the flipped-switch gene
that killed your father too
and fifty-fifty might get your kids.
Hold on, Rosendo,
to whatever shards we can save for you
of this dwindling world.

Cary Barney was born on Long Island, raised in Massachusetts, received a BA from Marlboro College and an MFA from the Yale School of Drama. He has lived in Spain since 1991 and teaches theater and writing at Saint Louis University’s Madrid campus.

It’s a Grand Night for Singing

It’s the usual cramped hustle between platforms.
Blue tarps and green scaffolds narrow the passage
down and elbowed around the vague gapers
who possibly know where they’re headed
but hesitate and rotate below my speed, well
anyway, I find little vacancies to slip between.

Left in my wake, a baritone warbler I almost don’t hear.
People sing in the subway, but this is so odd, a voice
of deep mahogany. Not like the flattened
tune-shapes chanted by men (always men)
following their earbuds’ commands.

Landed and ready, I bulldozed to no avail.
A ten minutes’ wait. The croon approaches,
patient, nearing, a church choir cornerstone.
And I know what he sings—how? This
something that’s maybe more than the moon,
maybe it’s more than the birds

maybe it’s more than the sight of the night,
in a light too lovely for words
I want to shut out because I’m ten again,
my mother has choral group ladies
around the piano, downstairs
after bed and I want quiet. Boy galaxy
of boy planet circling boy star,

it’s all me, weary of hearing the starts
and stops of this same same music.
For my mother, her women,
it’s all a grand night for singing.
Each time again, they insist,
the earth is a-glow
and to add to the show,

I think I am falling in love
he booms behind me, gray braid
poked from cloth cap, two-wheeled cart
with trash bag liner, umbrella handle
at the lip. He pushes toward the far end,
his own audience,
falling, falling in love.

David P. Miller’s chapbook, The Afterimages (Červená Barva Press), was published in 2014. His journal credits include Main Street Rag, Meat for Tea, California Quarterly, What Rough Beast, and Ibbetson Street, among many others. David is a librarian at Curry College in Milton, Massachusetts.

The pond, the light wave
in the water I sit beside
my heart becomes the rhythm

On the porch, thinking of you
the empty air
diminishes the distance

The red candle, igniting
the flame of my body
warms my tears

Xiaoly Li is a poet, photographer, and former computer engineer who lives in Massachusetts. Her poetry is forthcoming in J Journal and Up the River and appeared in Off the Coast and Gravel. She currently studies poetry with Barbara Helfgott Hyett.

What My Father Built

A nine-plank bridge,
a waterfall for boasting
bullfrogs, irises by the lake,
thrushes’ song.

At sunset he’d clear the table.
Once my mother said Perhaps
Herr Doktor might consider
doing the same at home.

Quiet, he left the cottage
down stone steps to the limestone
rock like a surfacing submarine
lapped by fishing boats’ wake.

He stood on his private
island, gazed into
lowering western sun,
gazed away from us.

I stood unseen
behind him just yards away,
troubled by his sulk,
his not wanting to be seen.

Steve Nickman lives in Brookline, Massachusetts, and takes part in Poemworks: The Workshop for Publishing Poets. He is a psychiatrist and works mainly with kids, teenagers, and young adults. He has a strong interest in the experiences and dilemmas of adoptees and their families, and is working on a book about therapy, The Wound and the Spark. Steve’s poetry is forthcoming or has recently appeared in Nimrod, Summerset Review, Tar River, Tule Review, and JuxtaProse.

after the henna dried in the weak sun

puffs of pink, yellow, blue and orange rose up

as we danced and welcomed Spring 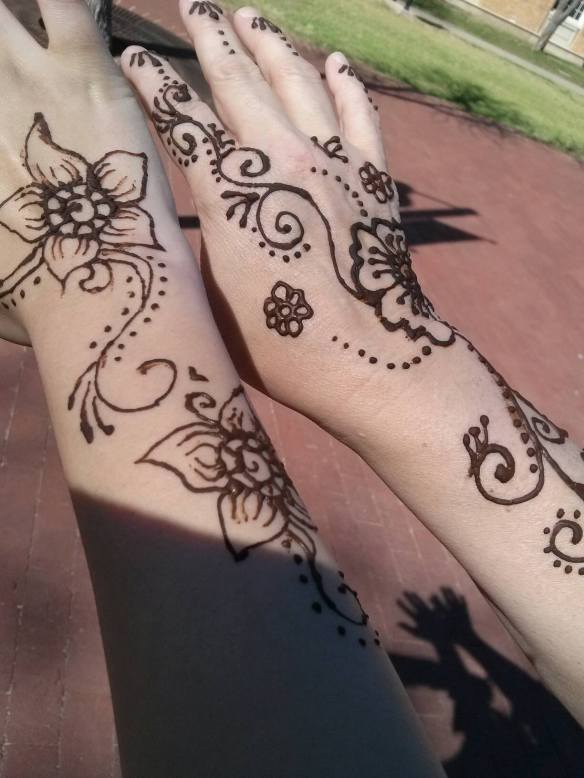 Photograph by the author

Tara L. Carnes is a musician, composer, poet, teacher, and spiritual director. She is a graduate of the University of North Texas (M.A.) and the Haden Institute’s program in spiritual direction. Tara’s poetry has appeared in Voices de la Luna, The Rose in the World, Illya’s Honey, SageWoman Magazine, Cholla Needles Magazine, and Presence Journal. She lives in Houston, TX.

Darren C. Demaree‘s poems have appeared, or are scheduled to appear in numerous magazines/journals, including Hotel Amerika, Diode, Meridian, New Letters, Diagram, and the Colorado Review. He is the author of eight poetry collections, most recently Two Towns Over (March 2018), which was selected as the winner of the Louise Bogan Award by Trio House Press. He is the Managing Editor of the Best of the Net Anthology and Ovenbird Poetry and is currently living and writing in Columbus, Ohio, with his wife and children.

The moon came too

To our daughter’s fiftieth birthday,
a party my son and I
had plotted, pieced and pruned so long,
all to appear an artless, airy evening-
merely a supper at the Sea Cottage,
on the porch, by the water.
But it worked. Who was more surprised?
Nina with her heart-stopping gladness
or me with my so-called effortless effort?
Long thin tables borrowed from the Islesboro school
draped in odd saris, my mother’s
faded checkerboard cloths.
Flowers in borrowed vases,
briar-thorn roses, buds of new-green garlic.
The guests all friends from childhood–
girls now lushmotherly
the guys bluff blowhard bearded.
My son recites from Yeats–a family favorite:
We must dance and we must sing
We are blest by everything.
The pale moon another surprise,
hesitating over the violet bay.

Maisie Houghton grew up in Cambridge, Massachusetts, and graduated from Radcliffe College in 1962. She published her memoir, Pitch Uncertain, in 2011 (Tidepool Press). Her poems have appeared in Common Ground Review, Paper Nautilus, Avalon Literary Review, The Café Review, and Third Wednesday. She currently resides with her husband in Boston, MA.

I skipped my visit to Vienna
Upon learning a Nazi
Helmed
Its current government.
I joined the boycott
I wrote a poem
I watched Austria
From the pages
Of Vogue
And spent
My marks
On a German girl.